PrevPreviousI got new gadget..
NextWhy wedding ring should put on the forth finger?Next

Sky Gift to My CAR!

P/S: This post is from my old blog. I would like to elaborate more and some of it is added extra from the original.

01 JUNE 2006, 5:00PM : That time is still my working hours, I was quite hectic at work before the day ends. My phone rings and I’ll have to stop my battle at work for a moment and proceed to the conversation. It was my sister, Michelle, she told me that my car was damaged by a gift from the construction site. I was angry but cool at that time. I told her I’ll be coming over and see it myself. I take a temporarily leave from my AM (Assistant Manager) to look at the damages. It was raining and I was walking to my sister’s place which a few blocks away from mine. While walking I recalled some cases happen recently in our country about car being crushed by construction object. Corporate hotshot Dr Liew killed by falling 2-ton mould or from our fellow blogger. DAMN! I was so fear and trembling, hoping not to see my car in that kind of situation. 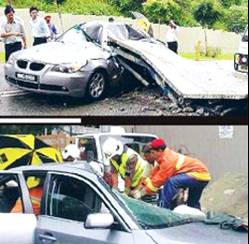 Once I arrive at the scene.. Here isÂ the picture! 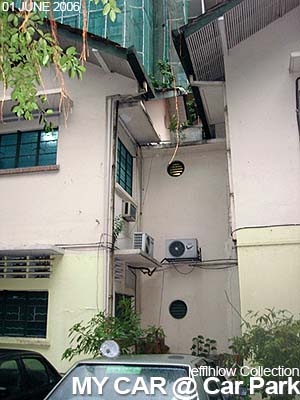 Pheeww!! It was not as bad as Dr Liew’s case. It looks fine from behind. The minute I went further in front and I look at the damages. I was stunned for awhile as I see how the damages had occured. I am glad that I wasn’t in the car or anyone was around.

Here is what happened! 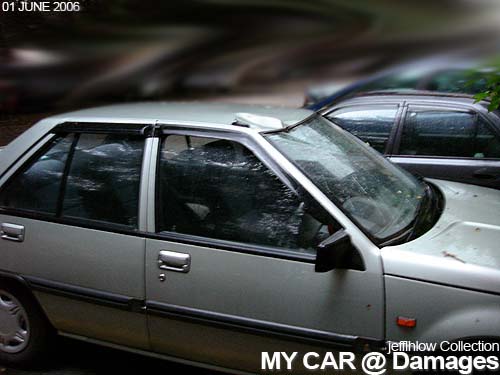 Let’s go close up and see what’s up! 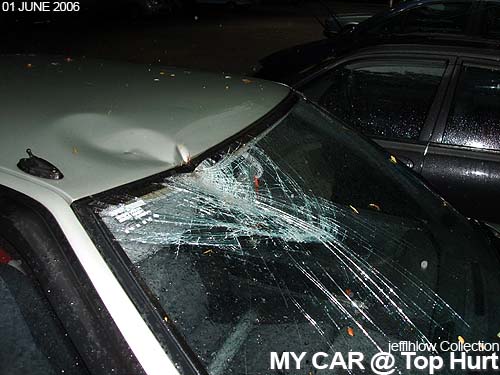 I am luckily to have a tampered glass on my windscreen or else I will have the whole screeen shattered and the worst nightmare would be myself in the car starting to go off OR I am about to open the door and that thing might have just HIT me and I BELIEVE you guys can imagine what would have happen. Newspaper headline will write “A youngÂ IT Executive killed by object falling from sky”. Then then I will not be sitting duck here and typing out the story! Here, I manage to caught the convict to these damages..

After that, I check on how did the convict hit my car! 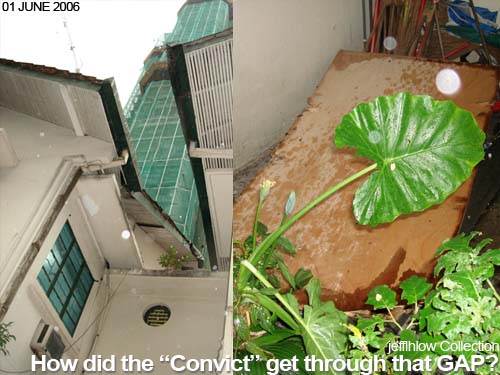 The construction was quite far away from the building where my car supposingly to be shield from it. However, they sure did a perfect physic calculation and the weather was rather windy and raining quite heavy, IT HITS JACKPOT! The contractor came by and see the damages on my car and his company willing to compensate all the damages to the car. I was like… Fine as long as someone willing to pay up for fixing which the bill might goes up to RM 4K – RM 5K. In another thought that fixing might take sometime and once the accident happen and there is no Police Report made within 24 hours they are not liable to anything. I decided to made a Police Report at Police Station and then proceed to Police Traffic HQ for them to take the picture of the damages caused. The jam is very bad in the city. It tooks me almost 5 hours to get everything done. Pheewww!! There goes my date for dinner with Peng Peng. She had to forced to spend the time with me going around town to get all these stuff done. DAMN!

Finally I got home at about 1AM including having dinner and stuff la.. Later I got more things to do. During the dinner earlier, my sister had complained to me that the construction site had been dropping alot of stuff into my sister’s office such as saw, hammer head, glues, bricks and etc.. They got away easily as my sister boss is OK person as long as they fixed it back. Now it really sound scary whenever I park my car over there already. I also worried for my sister’s safety as well. Man.. *Touch wood* God knows what will drop off from the site again!

Still waiting forÂ the repairing work on my car to be done. Now it cause me so much inconvinient as I have to take LRT to work and all my transportation had been crippled. So much so I am carrying my laptop and documents. DAMN! I didn’t know they are such heavy weight. Caused so many people inconvinient as well and my weekend plans had to be cancelled. This is real bad. I had enough bad experience and it really got me even better. But anyway, just like my title “BORN TO BE HURT!”. I have to cross my finger that I am just slightly hurted and not DEAD!’;’ type=’text/javascript’>