Skip to content
PrevPreviousMy first little red book from my country…
NextReborn of my passion! Paintball!Next 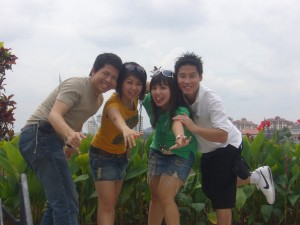 It was great weekend and Syin‘s cousin, Iris suggested bringing her BF, Dillon around KL for a tour trip to visit some great place. Dillon was a good guy from Singapore and he serves the Air Force for almost a decade. WoaH!!! 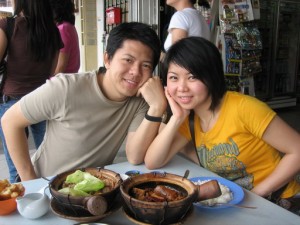 We only woke up at 9am and we head to pickup Iris and Dillon then we head to had BAK-KUT-TEH (Pork bone tea). It taste great and I had 2 bowl of rice to go with it. These pork meat it was so juicy and tasty. We had 2 type of it. The standard one and the dried one. We also add 1 plate of fried vege and 2 bowl of Youtiao aka golden deep fried strip of dough.

First Tour – Putrajaya
Since we are not very sure how to drive to Putrajaya through NKVE so I decide to take the Puchong highway. We finally reach Putrajaya after paying one toll cost RM1.60 at about 11am. 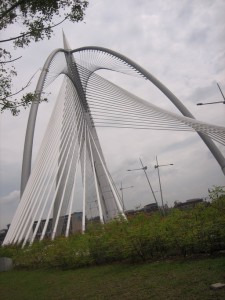 Our first stop, Jabatan Seri Wawasan, the bridge is magnificent as the design is unique. It looks like a yacht to me. Then our next stop is the prime minister office building. 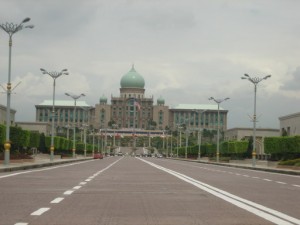 It was a huge place and even before we reach there, the mosque built on the lake were our stop for photos. The scenery was just great but it was hot as there ain’t much shade around. 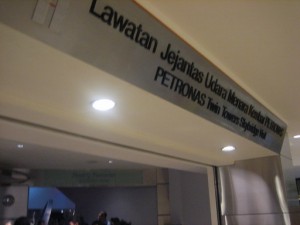 Once we are done snapping photo and cruising around, we are heading to KLCC for the bridge. We reach there about 2pm and we suppose to walk the KLCC bridge, however the receptionist said the ticket were free and given away at 8am. She suggests that we should come before 8am for the tickets. Then we decide to walk around the exhibition room just next to the entrance.

We had some fun playing some of the gadgets they prepare over in the exhibition. We also watch a demo called Tesla Coil which generates a 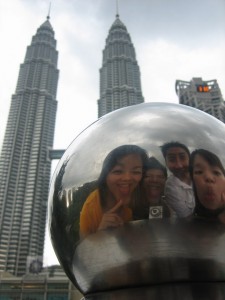 deadly electricity to be hit on the KLCC model. They showcase it every 10minutes. Not bad though… I got video for it… Check it out!

Then we walk out of KLCC and head to the park and had some picture with the giant building. The park filled with people doing the same things and having some romance and family outing.

We walk to the bridge in the garden and I found a metal ball. I just simply take a photo of myself on the metal ball and I found it so funny. So I grab the rest of them and snap… Here you go  –>

Try to guess who is who… HAhahhaa…. 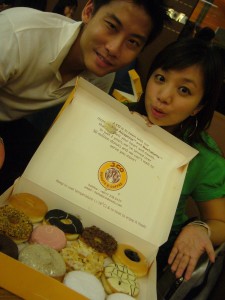 Since we are so hungry and wanting to have some tea break. Syin suggest going Pavillion to have J.CO Donuts. That time was about 4pm already. Since KLCC and Pavillion is just a street away, we can walk over but I decide to drive better. We paid the car park for KLCC for RM 5.50.

As usual the J.Co Donuts is packed with more people than I first blog about it. Believe me or not, I got my 2 dozen of J.Co Donuts in less than 5 minutes. Hahahaa…. We dine in… And we paid RM31.50 for 12 pieces and a J.Co Oreo Freezer.

Not too bad afterall la… Then we walk around for awhile looking inside of the mall and snap some pictures too.

Forth Tour – City Harvest Church, Sunway
We left Pavillion at 5pm and heading for church service as I don’t want to miss the Kefira Show as I’ll be in SG the next day. I brought along Iris and Dillon to join us. I really hope that they won’t get bored le… However, getting bored in CHC? That’s impossible!

We finally reach church at 5:30pm sharp and luckily enough we have a seat. The church is already packed with people. Kefira Show was the 3rd production originates from CHCKL. The actor and actresses are getting better each production. David Oh is getting much more stylo and he got the character to his role in the show.

At the end of the show, Pastor Kevin said Kefira Show will be shown live at Plaza Low Yat at night and our beloved Prime Minister will be the audience together with many. This is really a great blessing from our Father. Thank God! 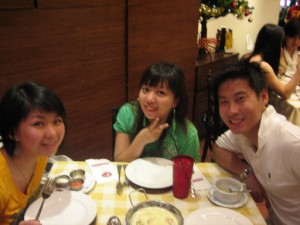 After the service, we went to Sunway Pyramid for dinner and also do some tour routine. Snap! Snap!.. We went for a walk around the new Sunway Pyramid mall. I went to Colin’s shop to look around and also I went to SUB to see what’s on sale. I got a white jeans for only RM 19.90. The price is just too cheap that I can’t control myself to get it.

Later we had dinner at Manhanttan Fish Market. It was nice and I tell you their seafood is fresh and soft. We ordered their Soup of the day for 2 as we are sharing and 2 set Catch-of-the-day which comprise of a soup and a maincourse we get a free bottomless soft-drinks. Then we ordered an appetizer which is Cheezy Mussel. This is very fresh and cheezy. I loving it!

Next our main course which is Seafood Platter. The waiter actually burn the cheese to melt in front of us before serving it. Me and Syin were bless as this dinner was paid by Iris and Dillon. Muahhahaa… A free blessing dinner.. However, Iris is more wicked than I am as I was about to wait for her come back from toilet and went to paid the bill. She came back and said it was paid.

Then we walk outside the mall to snap some photos with the Egyptian Lion. I never had a photo like this before.. This considered my first time thou…

Finally
Yup.. We went home at about 11pm.  The day is finally passby and I am almost exhausted but I was alive when I heard Syin said that Iris and Dillon really enjoy going to City Harvest Church with us. They felt a strong spiritual realm and Pastor’s preaching had shown Jesus’s characteristic which is a great counselor in their life. Therefore I am eager to wait for tomorrow..